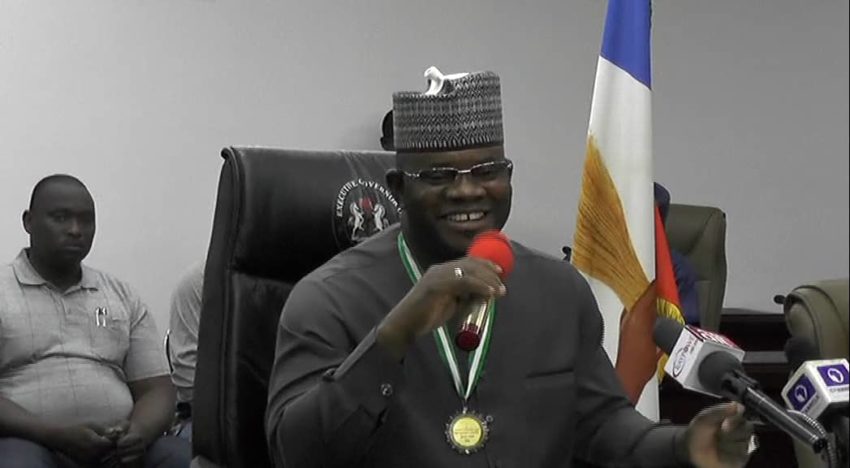 The governor of Kogi State, Alhaji Yahaya Bello has assured the youths of Kogi State that he will collaborate with Barrister Natasha Hadiza Akpoti to rescusitate the moribund Ajaokuta Steel Company, ASCL.

The governor made this known on Sunday when he hosted the youths of Kogi State under the auspices of Kogi Youth Congress, calling the governor to collaborate with Barrister Natasha Hadiza Akpoti in her struggle to rescusitate Ajaokuta Steel.

Addressing the youth at Banquet Hall, government house Lokoja, the governor noted that, the day will be remembered because the youths has decided to defied the status quo of watching from outside, hence take the bull by the horn and decided to be part of rebuilding of the state.

“Today is another great day for this administration, because the youths has decided to take charge. Today, I am being challenged, I am being charged. Once you challenge me, criticise me, I will be at my best. I wil not fail you all In Shaa Allah.

“Barrister Natasha Hadiza Akpoti is my sister, a vibrant, energetic, courageous and a very beautiful lady. Unknown to her, I have always admired her tenacity.

“What Natasha stands for on Ajaokuta revival is what I stand for. From today, I have adopted her as my political daughter”, he said.

The governor explains that, Ajaokuta is a federal project capable of creating job for jobless youths of central geopolitical zone.

He disclosed that he has met with President Muhammadu Buhari on the revival of Ajaokuta Steel, adding that efforts are already in place to rescusitate the moribund steel.

“With the political will, my efforts combine with Barrister Natasha Hadiza Akpoti, I am confident that Ajaokuta will be revived In Shaa Allah, most especially to bring the original builder.

Commending the efforts of the youths, he charged them to continue to be supportive and be patience with the administration of President Muhammadu Buhari and his administration because they took over on zero level.

He explained that they have passed the zero level, and assured the youths that before the end of the first tenure of their administrations there will be a tremendous change.

“The president has no oil well, no share in any of the oil companies, no foreign account, what the president is after is how to build a great nation, this is the path I am on.

“Don’t just seat down at the comfort of your room and criticise, I took the challenge, and the risk to come into the mucky water and clean the system.

“This is exactly the same thing Natasha is after. My brothers and sisters, I want more of this challenge, continue to bring it to my doorstep, you are simply asking me to do more,” he said.

Speaking earlier, the president of the association, Comrade Samari Zakari said the group is pleased to be hosted by the governor.

In his words, “Barrister Natasha Hadiza Akpoti leads an inclusive all-stakeholders’ struggle and street action to get the federal government to earnmark fund for the timely completion of the comatose Ajaokuta Steel Complex.

“As a responsive youth pressure group, we have come to beseech your fatherly solidarity and empathy over her enduring sacrifice as well as her long-running struggle to help the state rescue the dying steel industry from the jaws of its unseen enemies,” he said.

Pointing out the rare qualities of Natasha, the president said, “Our amiable and humble Queen of Steel has begun to record modest recognition and laurels from quarters that are even outside the state and beyond the shores of our society and Nigeria in general. On the strength of her good name, a street in Abuja was recently named after her by the authorities of the FCT.

“On our own path, and as students and mentees of the Natasha Civil Society Movement for the Revival of Ajaokuta Steel Company, we strongly believe in the vision of your people-oriented leadership as well as the policy thrust of your government”, he said.

Emphasising the strength in collaborating with Natasha, Samari noted that with the amiable Queen of Steel standing shoulder-to-shoulder with the governor on most of the issues surrounding the Ajaokuta Steel Company, the collective quest and push for the economic emancipation of the jobless youths would be resolved and realised withing the shortest possible time.

“Barrister Natasha, by her character and ideological persuasions is not a politician and has never been into partisan politics. Rather, she has been a pure activist of note.

“Your excellency, it is against such rare sterling qualities and humanitarian credentials that we seek to make a special appeal to your Godly conscience to carry her along in your socio-economic policies, especially where and when it concerns the well-being of the youths and the sanity of the society.

“We want to also appeal that the she be given some political and economic paraphernalia so that she would be in good stead to contribute her Allah-ordained quota to the policy architecture of the government back home and that of the centre”, he said.

Also speaking, the national Publicity Secretary of the union, Comrade Hamza Lamisi, noted that there is need for unity of purpose between the governor and Barrister Natasha Hadiza Akpoti centred on the revival of Ajaokuta Steel Company.

“Your execllency, Mahatma Gandhi said and I quote “honest difference is often a healthy sign of progress”. May we disagree honestly but never let go the ultimate goal which is a functioning Ajaokuta steel company capable of saving us from joblessness, youth vices, insecurity and over-dependence on government.

“Barrister Natasha Hadiza Akpoti is an industrious social reformer whose resilient zeal for industrialization knows no bound. Your Excellency, you are a pragmatic leader with strong potentials capable of transforming this state into the best among committe of states. So if we fail to achieve the best and revive Ajaokuta steel in your era, history will not forgive both of you. We appeal to you and Barrister Natasha to hold each other’s hands, walk side by side and take Kogi State and Nigeria to a glorious victory on Ajaokuta Steel”, he said.

In a way of appreciating the governor’s style of leadership, award of recognition for youth friendly policies and pragmatic leadership was presented to the governor by the group.