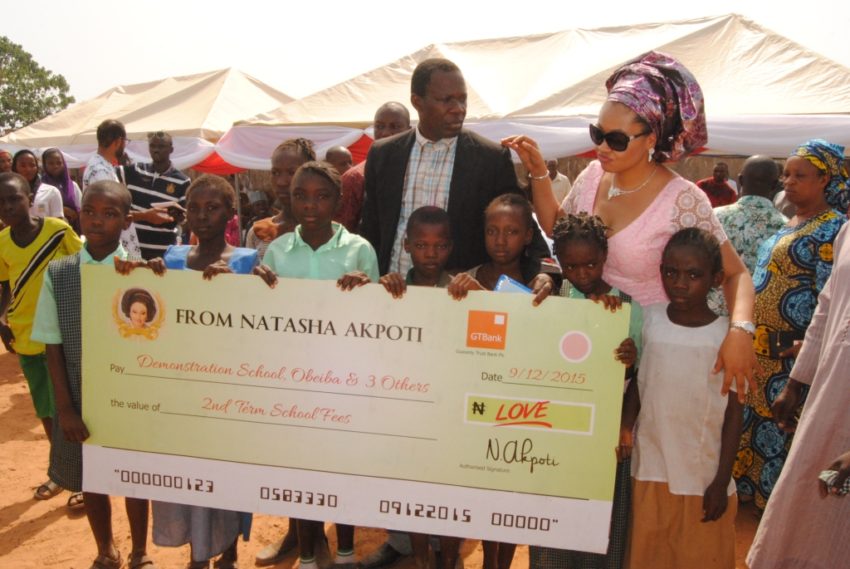 The Proprietor of Builder Hub Impact Investment Project (BHIIP), Barr. Natasha Akpoti has hosted pupils from four primary schools in her hometown of Ihima in Okehi local government area to mark her birthday.
Natasha flanked by the Obobanyi of Ihima holding a dummy of the bank cheque
The event held at the premises of Demonstration Primary School, Obeiba Ihima and was attended by parents, teachers, the school children and some notable members of the community on Wednesday, December 9th 2015.

Natasha used the event to present a bank cheque to cover the second term school fees of 596 pupils from the five primary schools in the community.

The second term school fees of Demostration Primary school Obeiba was paid for while pupils from the remaining four schools got a whole year school fees paid.

Natasha who recalled the difficulties in paying her school fees in her days in the university also acknowledged the divine blessings in her life over the years.
“There was a time I could not pay my school fees in the University. To God be the glory, I have put over twenty students through university.

“Paying the school fees for about 500 pupils is much. I don’t have much but celebrating children is celebrating education. I believe every child that I assist will give back to the community when they grow up”.

In his opening remark, the Obobanyi of Ihima, Chief James Rufus Adayi described Natasha’s gesture as an uncommon feat worthy of commendation. The Obobanyi then urged the entire people of Ihima to emulate their daughter that is following the philanthropic footsteps of her late father, Dr. Akpoti of blessed memory.

Free gifts including writing materials were distributed to the jubilant pupils.