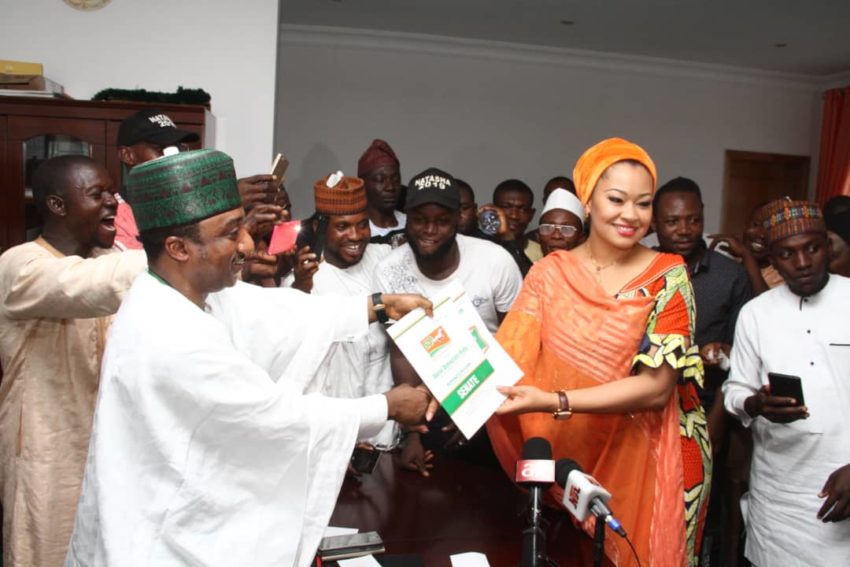 As she is always known as woman of peace, humility and faith she indeed broken even today by courageously picked her nomination forms on the platform of Social Democratic Party (SDP),which of course was not new to Anebira. It was under this party the great late A T Ahmed was elected twice as Senator. While her father Dr. Apoti was the state chairman of the party on caretaker arrangements. suffice to say, she has a foresight for improved welfare of Anebira through approval of Mr President for the completion of Ajaokuta and Itakpe respectively.
This will enhance employment opportunities for our yearning youths.

The decision to opt for SDP was to let peace reign and avoid blood letting in the land as her ambition does not worth any innocent person’s life hence two captain can’t be in the same ship.
What a Godly and selfless leader !!

Her action (s) was never a cowardice but passion and respect for sanctity of lives and properties.

Natasha vows not to hurt a fly to get to senate and she believes in the people that wherever she goes people will follow her for positive change.

In the modern democracy what matters most is the delivery capacity of a candidate not the party, which is why Pius Lasisi was voted senator under GNPP a minority Party as against NPN second term popular candidate.

political parties are just forum to coordinate political activities for voting purposes. The crux of the matter is the candidate that is focal point.

Natasha’s courage and action(s) is a replica of Abdul Kokori’s election under ITU as against NPC then at the centre and PIUS Lasisi of GNPP as against NPN at the centre respectively .It has happened before and we shall do it again.

From research findings Ebira candidacy has never emerged from the Party at the Centre but always work for the centre after election in the interest of Ebira People. Natasha and her supporters are for President Buhari 24/7 but the state machinery is structurally defected that can’t accommodate us, reasons she opt for SDP

Natasha is never antagonist of the Centre but friendly and protagonist of Federal Powers.Most especially President Muhammadu Buhari and his government. To fulfill destiny she has to do what she did ‘cos the hawks and Owles in the state chapter of the party at the Centre are hyenas and Lions ready to spill blood.

Anebira!! Natasha has gotten nomination is now left to us to do our part by voting her enmass to Senate for our dreams to come through.
She has not disappointed Ebira ‘cos she has brought us nomination.

May Almighty Allah guide and direct our conscience to do the right thing by voting Barr.Natasha H. Apoti for senate.